Street Man with Fur and Beard 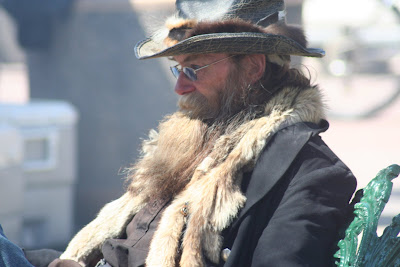 Just look at this man. What do you suppose his story is? What would he say or do if you walked over and said "hello" to him? Can you imagine him playing as a child in a playground? What kind of President of the United States would this man make? So many assumptions we can make from outside looking on him. That hat, that beard, that coat, that fur draped around his neck blending in with his beard. What does his heart feel at this moment? Does he want anyone to know? When I see images like this man that I saw in Southern New Mexico, I can't help but feel the sense of strange distance and barrier that can seem to exist between me and my fellow brothers on this planet. I worked enough with some hard men in prison to know there is always a heart underneath.....always. It doesn't always mean that a given man will choose to abide there in his own heart....enough for me to know that at least it is there inside. And in that measure we are the same.
Posted by RA Revel at 10:36 AM