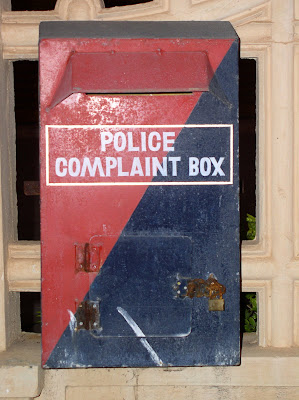 This photo was taken in southern India. I have no idea if a Police Complaint Box is for complaining "to the police" or "about the police", but in any case it was obvious by the rust on the pad lock and hasp that it had not been checked in quite some time by any authority responsible for such oversight. In fact I never saw a single police official anywhere the whole week I was in this village. Oddly enough the writing was in English and I imagined it was somehow designed to give tourists comfort that there was law and order in this area. I got a good chuckle out of it.
Posted by RA Revel at 10:55 PM No comments: 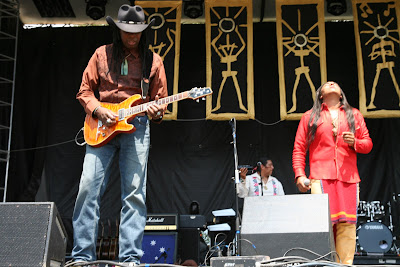 I saw these guys at the Taos Solar Music Festival one year. The lead singer embodied a very potent Native American spirit, and the black man on blues guitar was amazing. As a white man observing I felt the juxtaposition of these two beautiful men making soulful music together in this land, where their ancestry had suffered so much at the hands of the European settlers. I felt mesmerized by their unique relationship, and compelled to absorb their music. It made me feel that being American was a rather complex cultural experience, a tapestry which was all at once woven together with tremendous suffering and exquisite beauty.
Posted by RA Revel at 10:02 PM No comments: 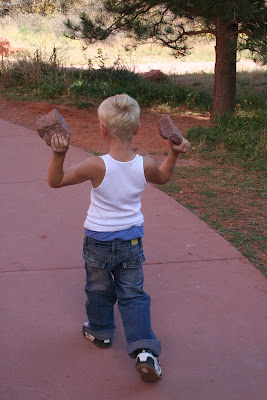 I saw this kid in the Garden of the Gods, just west of Colorado Springs. He was walking in front of us and just holding up these two rocks he had found somewhere as if he were Atlas himself holding up the world on his shoulders. I only saw him from the back, but even from that vantage point he seemed so proud and full of his new-found boyhood strength. He just kept rambling on down the path like this toting these boulders, sensing his own power all the while. I thought soon he would toss them aside, but he never did. I thought then that his soul was on fire for something his young mind might take decades to eventually understand.
Posted by RA Revel at 1:07 AM No comments: 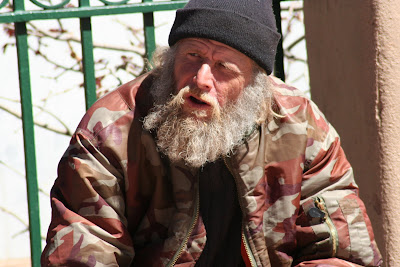 I think this nation's homeless are some of the most fascinating and interesting people in the culture. They have stories and dramas and insights that few mainstream folks could even imagine. This man, in Santa Fe, New Mexico struck me when I saw him in the Plaza. He had a solid dignity about himself and an odd intensity, as if he were focused on observing all the conventionality around him. His dirty white beard, camouflage jacket and old beanie hat seemed more graceful shelter against the elements than most of the newer clothes I have worn in my life. I wondered what his story might be, but I never asked. Upon reflection of this photo some time later I realized I had felt somehow intimidated by his presence, an affect few men have on me.
Posted by RA Revel at 12:53 AM No comments: 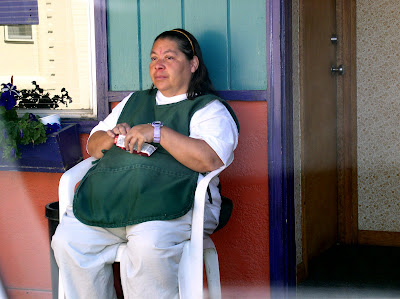 I acquired this photo without this woman knowing I had taken it, from inside a car. It's always hard to aim a camera at a subject in real life and not somehow disrespect their dignity trying to "capture" them. It's a risk that always creates a tension inside my body. I imagine no soul wants to be made into an object to be "viewed". I have no idea what this woman was thinking at this moment, but she seemed tired, uninspired and perhaps a bit forlorn. Her candy snack may have provided the only spike of interest she had felt in a blur of maid shift tedium. Or she may have been absolutely at peace with life and I the fool for imagining such things of her.
Posted by RA Revel at 12:39 AM No comments: 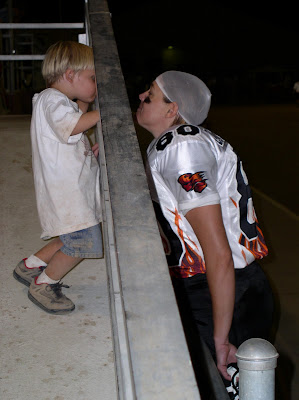 I had met this woman by chance running errands one day in Phoenix, Arizona. She had a very "big" presence about her and I struck up a conversation with her. It turned out she was a professional American football player. Up until that moment I had no idea there was such a league. She stood about 6 foot tall and weighed in at about 162 lbs. She was a solid woman. I guess I was so struck that I had never heard of professional women's football, she invited me to attend one of her games. I did. This photo captured a moment during the game when her son came down from the bleachers and called over to her when she came out of the game for a few minutes. There seemed to me layers of thematic juxtaposition rendered in this moment. The image makes something inside me smile to this day.
Posted by RA Revel at 12:21 AM No comments: