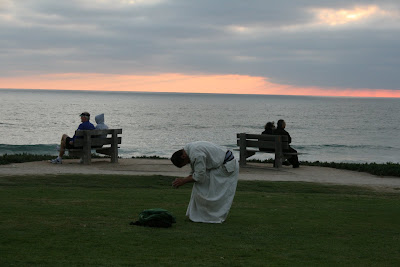 Everybody takes in a sunset in their own way. The two couples in the background quietly take in a Pacific Coast sunset in the traditional bench on the cliffs manner, while the man in the foreground bows to something only he knows about. I thought the moment had interesting dimension. This robed man never once looked at the sun as it set. He seemed absorbed with his movements and forms as he went through different positions. It seemed odd to me to not stop and take in the beautiful show nature was providing off on the horizon. The setting sun, which was gently bringing a close to the day seemed to bring most people to a stand-still as they gazed out at it. But this man was all internal and oblivious to the visual spectacle. I wondered why he was even here and not in some private studio. Maybe I found him to be a distraction. Maybe I wanted him to pull his head out of his personal robed ceremony and be still for a moment with the rest of us. Maybe I felt we all owed it to the day to just stop at the end of it and put aside the frenetic affairs of men while the sun said good night; but that's just my stuff talking. Like I said up front, everybody takes in a sunset in their own way.
Posted by RA Revel at 8:21 PM